Slow cooker spare ribs are the perfect way to cook up pork ribs.  Cook the ribs in the slow cooker,  then simply grill or broil with barbecue sauce for 15 minutes and the ribs are ready to serve! 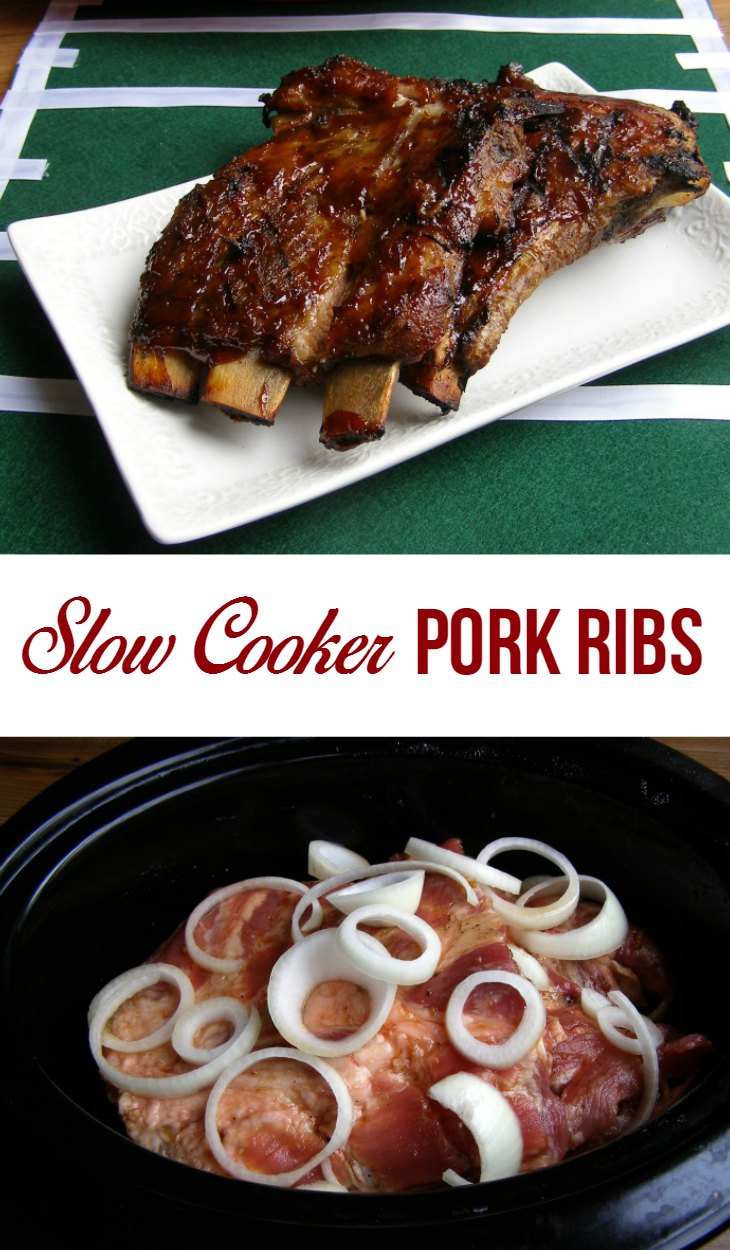 I grew up eating my dad’s absolutely amazing ribs. It was a sad day when I left home and could only eat his ribs a few times a year.

Then a friend sent me this recipe for slow cooking the ribs in a Crock Pot. She lives in Kansas City so they know ribs and she and her husband love this recipe.

My dad still thinks I’m crazy for cooking baby back ribs this way, but they turn out amazing and are no work at all. 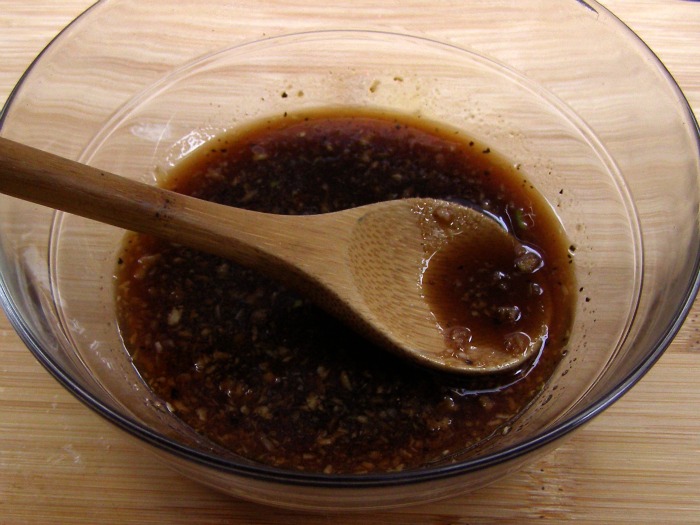 The marinade that the ribs cook in is pretty simple. It’s a wet rub of brown sugar, pepper, salt, liquid smoke and garlic. 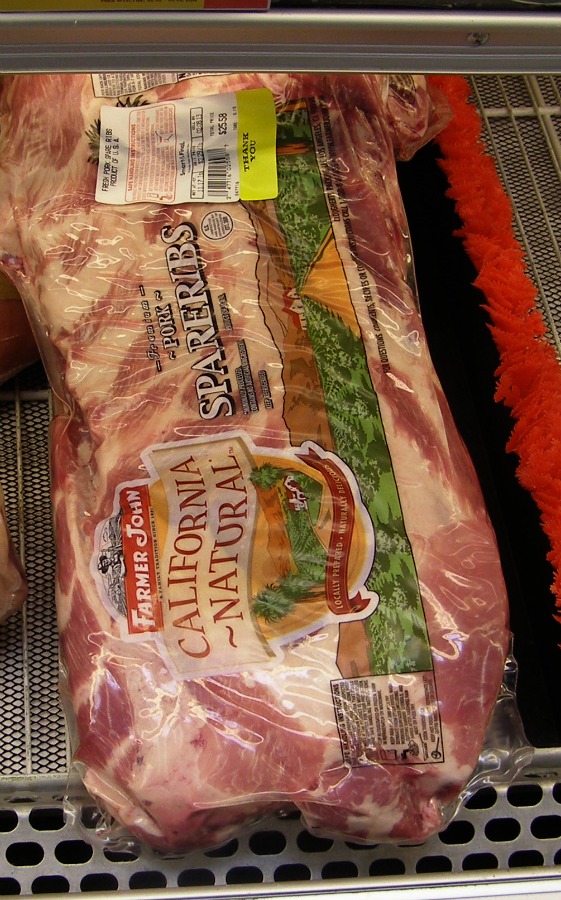 We’ve used both baby back ribs and pork spareribs for this recipe. Both work great!

This time I bought a package of Farmer John’s Spareribs at Smart & Final that was over 8 pounds and contained 2 racks of ribs. 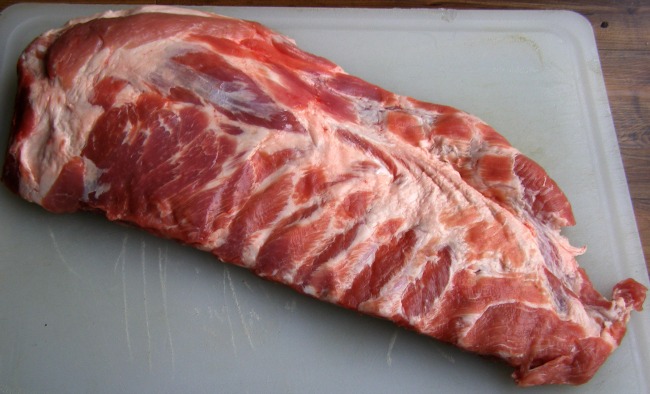 I cooked up one rack, as seen above, which was right around 4 pounds, and froze the other rack for later. For a party, I’d use 2 slow cookers and cook them all. This is a great party recipe and it’s super easy. 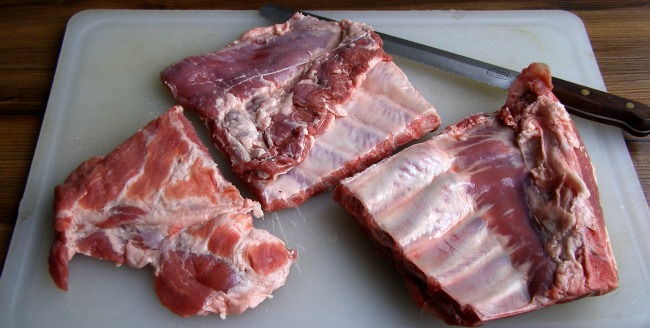 Cut racks of ribs in to 4 equal parts – or however many pieces you need to fit them in to your slow cooker. I use a rather large slow cooker – this Hamilton Beach slow cooker  is my work horse! But just a basic Crock Pot works, too.

I cut this rack in to 3 pieces because there was a large bone on the top of 1/3 of the rack. Whatever works! You just need them to fit in the slow cooker. 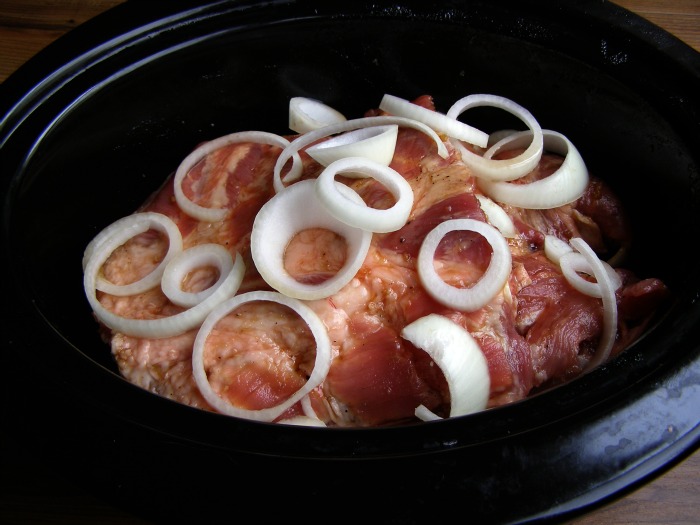 Place half the ribs in the crock of a slow cooker. Rub half of the brown sugar mixture on to the ribs. Layer half the onions over the ribs.

Repeat the process with remaining ribs and onions. Pour the soda over the ribs. Cover and cook for 8 hours on low. 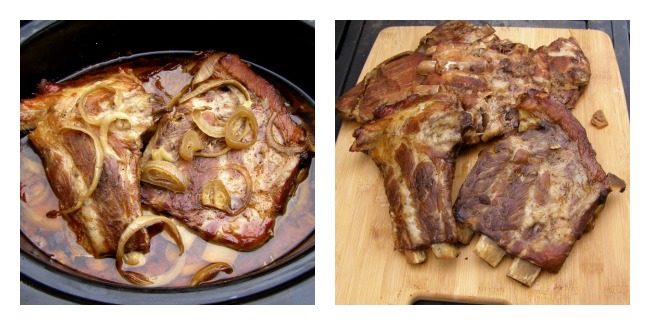 Carefully remove the ribs from the slow cooker on to a platter. They will literally be falling off the bone so this can be tricky.  Just go slow!

Now, the ribs are finished off on the grill. Everyone will think you’ve been slow grilling them all day long. 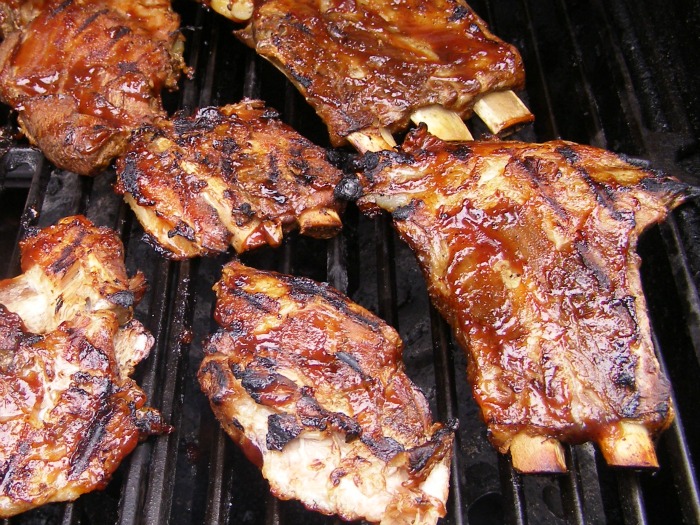 Heat your gill to medium high heat.  Put the ribs on the grill on indirect heat.  Brush with your favorite barbecue sauce (mine is Sweet Baby Rays!).

Cook for 15 minutes. You could also broil the ribs until the are nice and browned if you don’t have a grill. 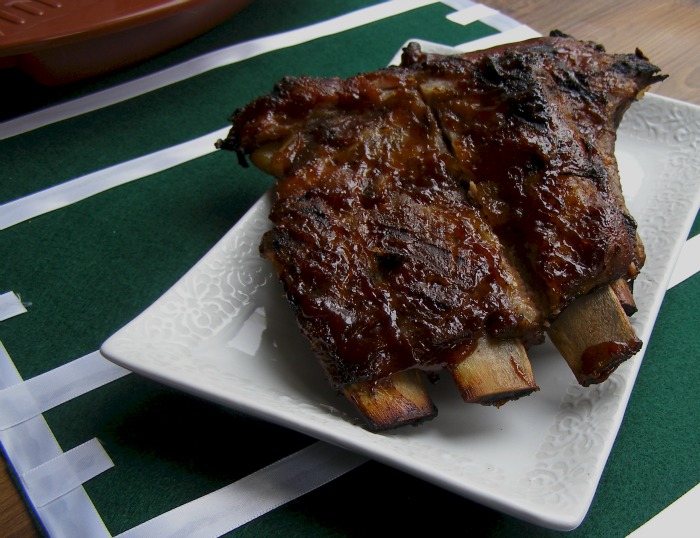 In a small bowl mix together brown sugar, salt, pepper, liquid smoke and garlic.
Cut ribs in to 4" pieces - about 4 ribs per piece. I usually try to break it in to 4 pieces.
Place a layer of ribs in the crock of a slow cooker.
Rub 1/2 the brown sugar mixture into the ribs.
Put a layer of onions on top of the ribs.
Put the rest of the ribs on top of the onions and rub with remaining mixture.
Layer remaining onions on top of ribs.
Pour cola over ribs.
Cover and cook on low for 8-9 hours.
Carefully remove ribs to a platter - they will want to fall apart! Just go slow and be gentle.
Heat barbecue grill to a medium high heat. Place ribs on grill, 4-6 inches off heat. Cover with barbecue sauce and grill for 15 minutes.

Check out all the recipes in our 30 Day Slow Cooking Challenge!