It’s time to grill seafood with easy shrimp foil packets on the grill! Combine potatoes, corn, sausage and shrimp scampi from our sponsor, SeaPak, to create a delicious meal in under 30 minutes. 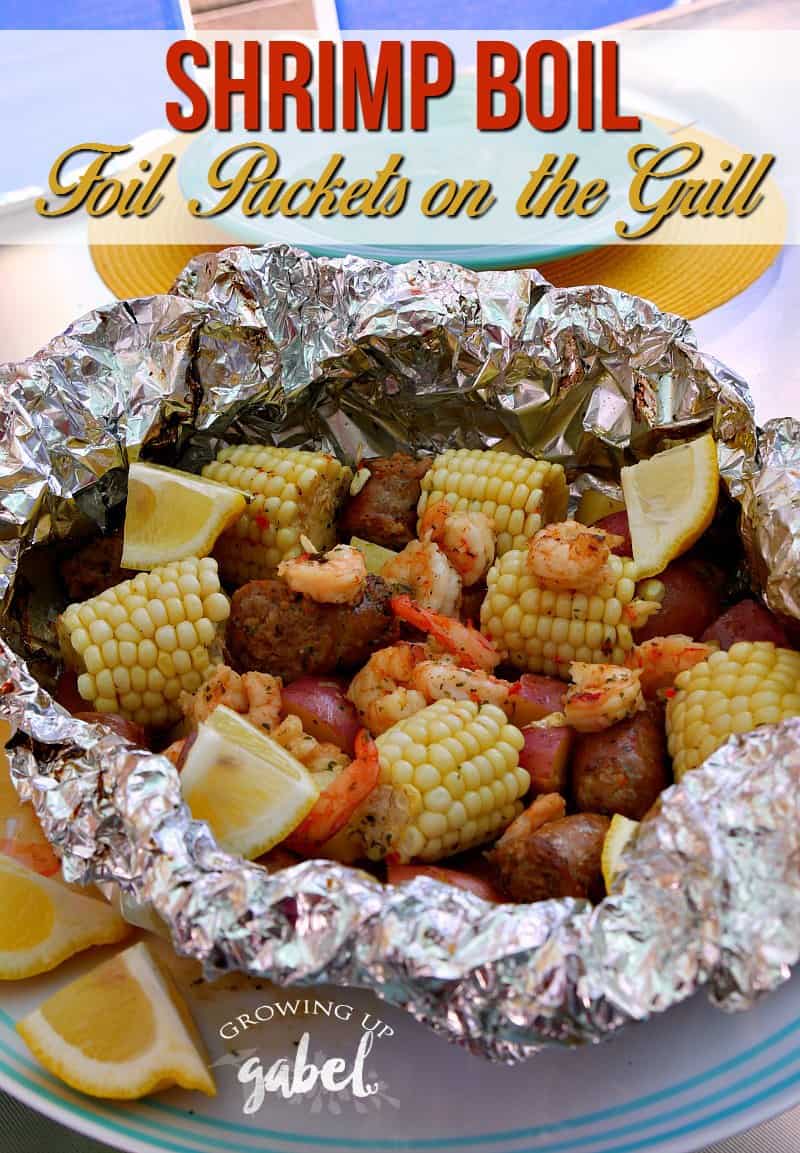 Cooking and eating outside is one of the best parts about summer especially now that we just created a gorgeous outdoor oasis in our small backyard. It’s my favorite place in our house right now. I’ll find any excuse to be in the backyard especially if it involves food. 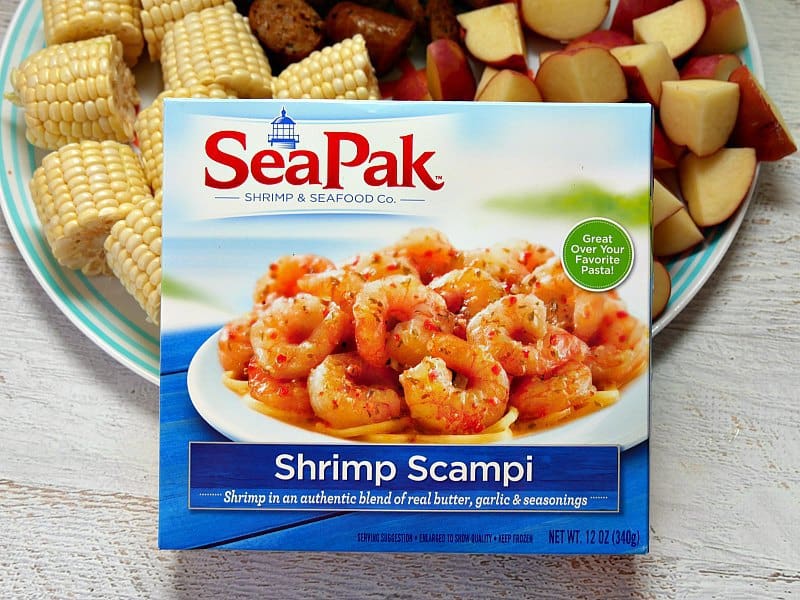 Shrimp Boils are one of my favorite summer meals, but they require a bit of work and prep and a lot of dishes. But there’s an easier way to make a shrimp boil using a grill, aluminum foil, and frozen shrimp scampi from SeaPak to make shrimp foil packets. 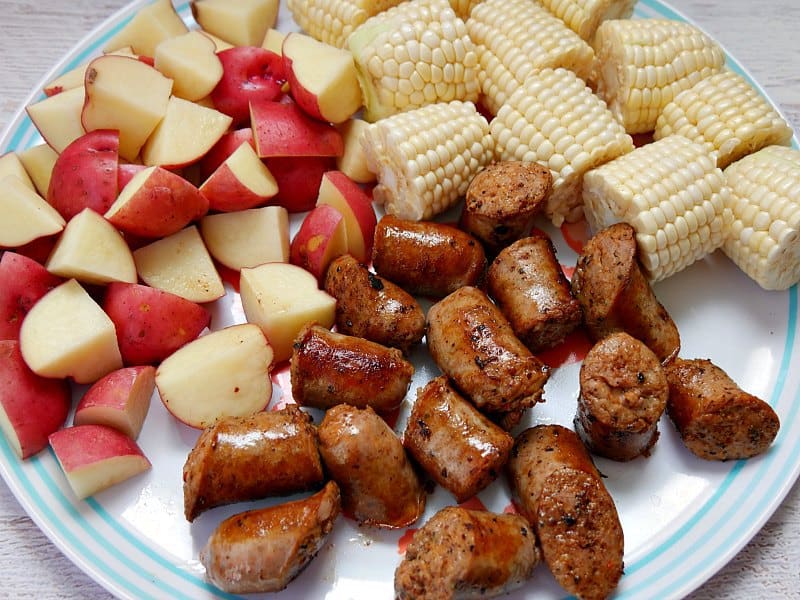 Start by prepping the ingredients for a traditional shrimp boil – red potatoes, corn on the cob, and mild Italian sausage. Cut the potatoes in quarters or eighths, depending on the size of the potato. Try to keep all the pieces the same size so they cook evenly.

Shuck fresh corn on the cob and then cut each ear in quarters.  Cook the sausage, and feel free to use smoked or kielbasa instead, and fry in a pan until cooked through. 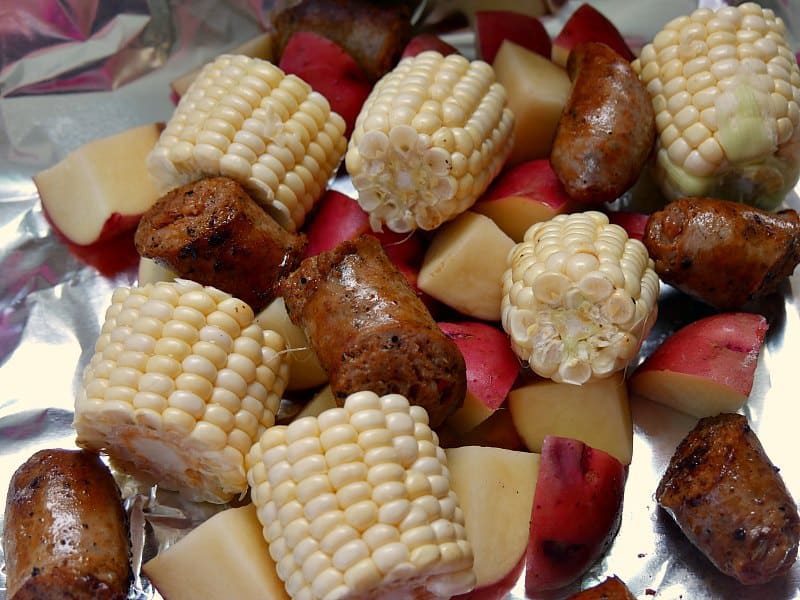 Usually to make a shrimp boil, you boil all the ingredients in a spice mix, layering them as you go.  For the foil packets, layer the ingredients on a large piece of heavy duty foil. Keep the potatoes on the bottom, followed by the corn as they both need to be closest to the heat of the grill to cook. 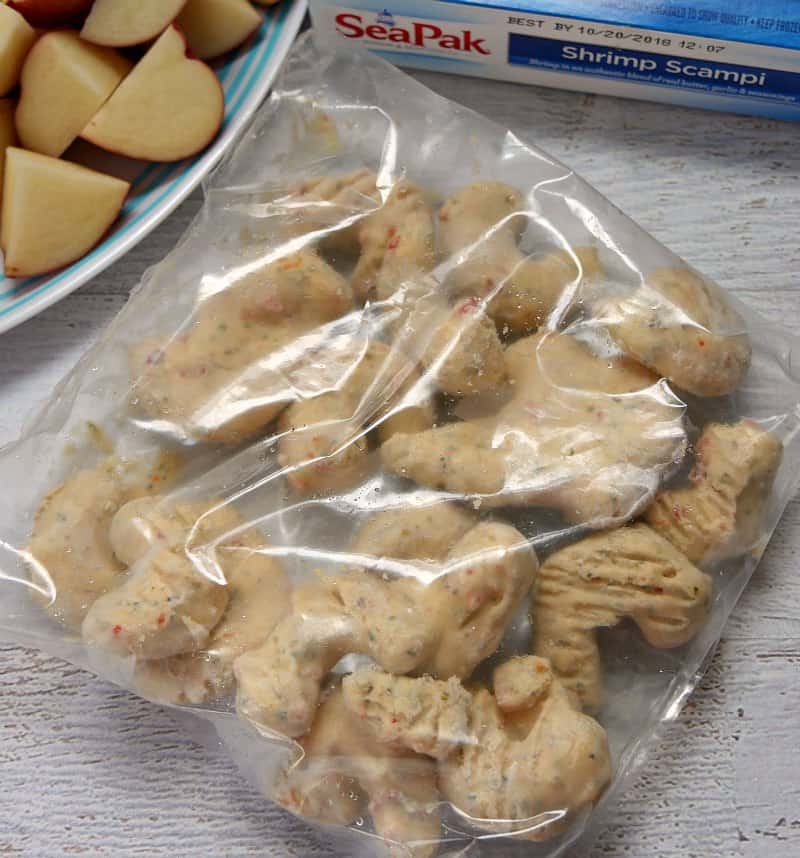 Now the secret trick! Grab a couple of boxes of SeaPak Shrimp Scampi. SeaPak makes it easy to enjoy a tasty seafood meal, especially when meal prep is the last thing on your mind. Just keep a package or two of SeaPak in your freezer for those days when you need dinner to be easy and want to enjoy more time outside. 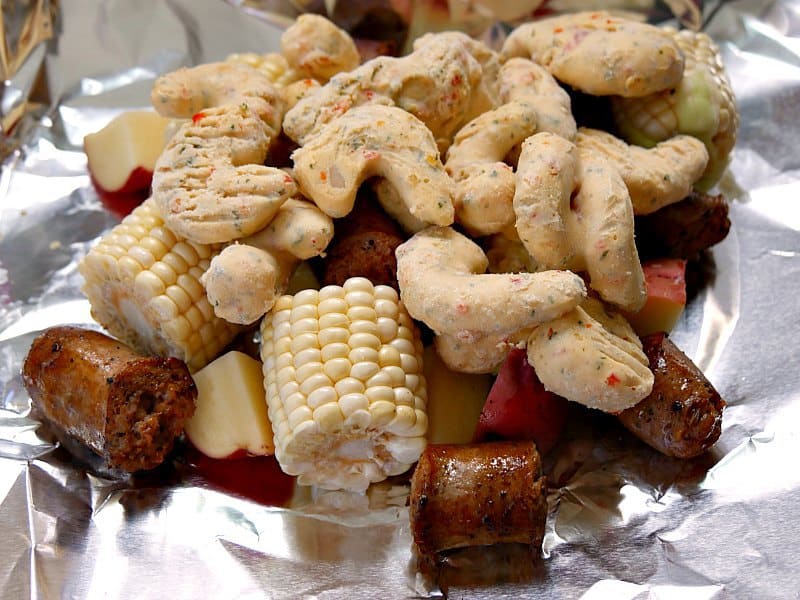 Put the shrimp scampi on the very top of the foil packet. This way the scampi sauce and spices will cover all of the food and the shrimp won’t over cook.

We used one box of scampi in each of the foil packets but you could easily use two in each packet for more shrimp. 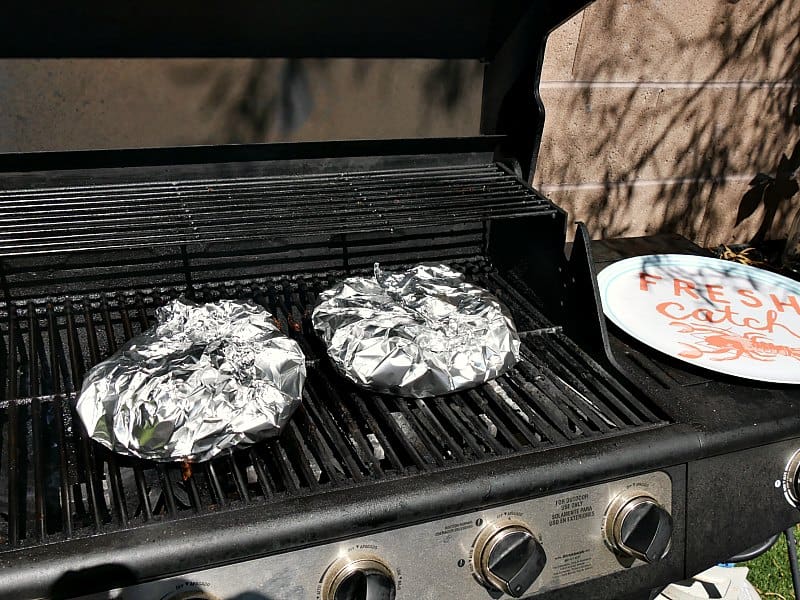 Fold the foil packets up tightly. Use a second layer of foil if need to make sure all the food is enclosed in the packet.  Cook the packets on a preheated grill on high for 12-15 minutes. Ours needed 15 minutes for the potatoes to cook through. 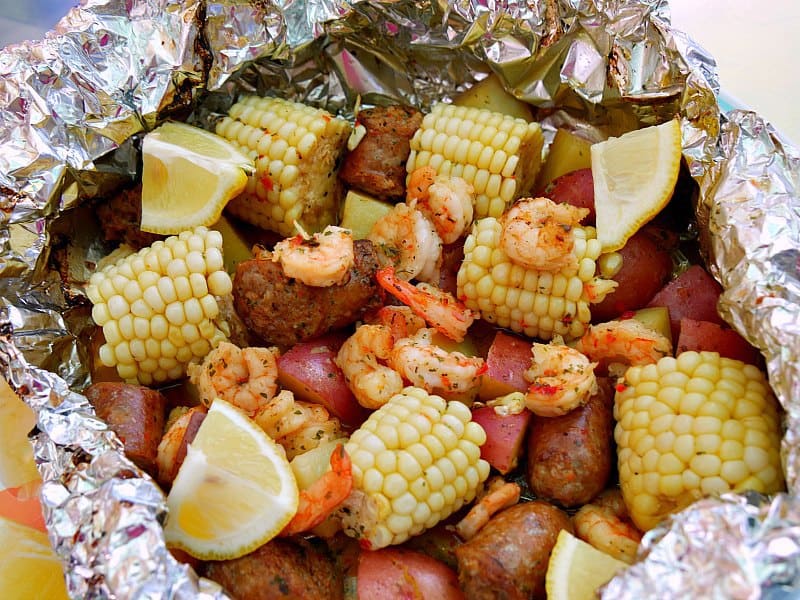 Carefully remove the foil packets to a large platter. Fold back the foil, making sure to be careful to avoid any steam that escapes.  Usually, you would need to serve the shrimp boil with melted butter. But thanks to the scampi sauce on the shrimp, everything is already covered in a delicious scampi butter sauce. 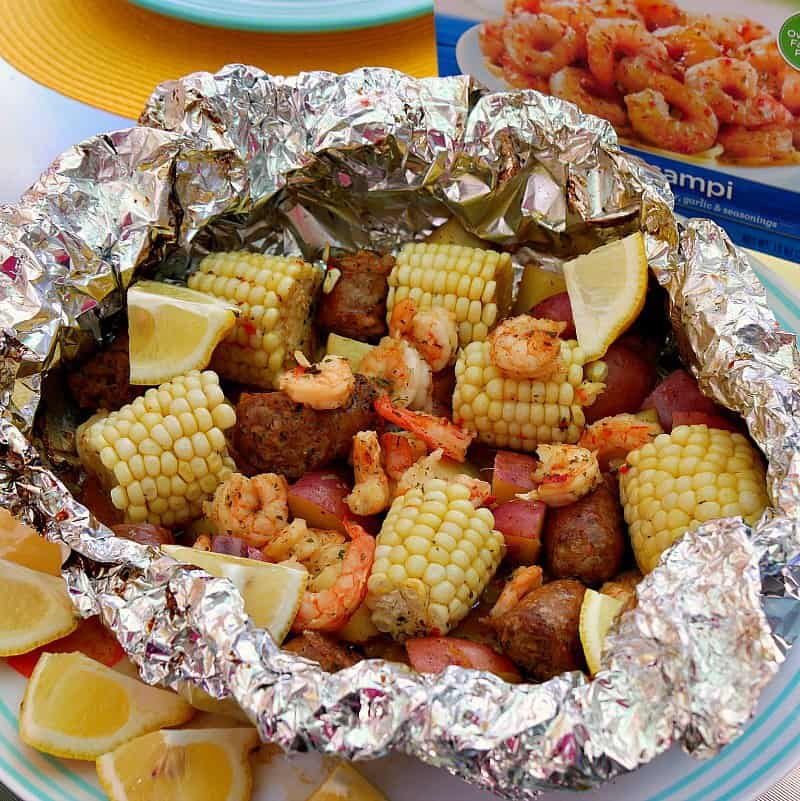 Serve with wedges of lemon and lots of napkins!

Layer half of the potatoes, then the corn, then the sausage in the center of  one piece of foil. Keep the potatoes on the bottom so they are closest to the heat.

Place the SeaPak Shrimp Scampi on the top of the other ingredients.

Carefully cover the food with the sides of the foil to enclose them entirely. Add another layer of foil, if needed to close the packet.  Repeat with the the other half of the ingredients and the other box of SeaPak Shrimp Scampi on the 2nd piece of foil.

Preheat a gas grill on high heat until hot. Place both foil packets on direct heat on the grill. Close the cover of the grill and cook for 12-15 minutes or until the potatoes are soft when pricked with a fork.

Turn off grill and remove foil packets to serving platters. Allow the packets to cool so they aren't too hot. Carefully open the packets and fold the outer edges for serving.

Serve with lemon wedges and seafood spices, if desired.


Amount Per Serving: Calories: 697Total Fat: 37gSaturated Fat: 13gCholesterol: 90mgSodium: 916mgFiber: 7gSugar: 9gProtein: 25g
This is a sponsored conversation written by me on behalf of SeaPak Shrimp & Seafood Company. The opinions and text are all mine.