Scalloped potatoes are the perfect comfort food and  side dish.  Sliced potatoes combined with cream of mushroom soup are then layered with cheese and dotted with butter.  Then bake in the oven or your slow cooker for a filling and delicious compliment to any meal especially an Easter ham! 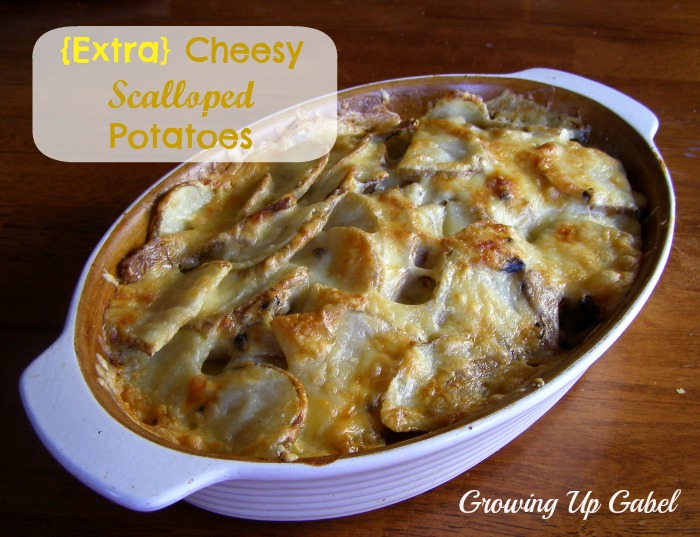 Most people serve some kind of potatoes for Thanksgiving.  In our house, we always have mashed potatoes, my mom’s  broccoli casserole, and pumpkin cheesecake with our turkey.  But this year I’m thinking about mixing things up and serving scalloped potatoes.  This is the one recipe my dad requests I make most often, so I’m pretty sure he wouldn’t mind!

The ingredients for this dish are super simple: potatoes, soup, cheese and butter.  I use homemade cream of mushroom soup, but the can version works, too.   Feel free to mix up the cheese if you prefer something other than cheddar, too.  I don’t peel my potatoes, either, but feel free to do so if you prefer them peeled.

I have made these scalloped potatoes in both the oven and the slow cooker.  If you make them in your slow cooker,  just layer as directed, but leave the top layer of cheese off until the last 30 minutes or so. Cook for 4-5 hours on high.