Five years ago I joined a Nativity Knit Along.  The idea was to knit one nativity piece each month for a year and at the end of the year, I’d have a completed knit nativity.  But life got in the way and the pieces I managed to knit were stored away in the knitting bins of death.  When I sorted through the knitting bins of death a few weeks ago, I resurrected the nativity and decided to at least finish what I’d already started, add a Mary, Joseph and a sweet baby Jesus and call it a nativity.

The knitting part of the nativity takes no time at all.  The stuffing-sewing-embroidery part of this nativity takes forever.  I literally spent hours stuffing, sewing and detailing the donkey! But he’s cute, eh?! 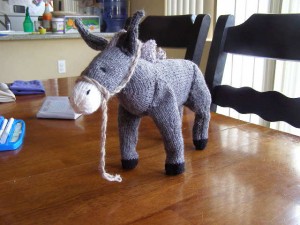 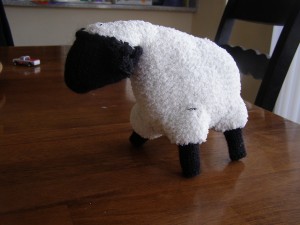 The pattern is by Alan Dart published by Sirdar as The Nativity Collection.  Most of they yarn I’m using is Cascade 220 with some Berroco Chincilla thrown in for the sheep.  This is not a small nativity.  The donkey and sheep are about 10″ tall!  Next up is the angel, which is half-knit and not put together at all.  Hopefully she won’t be nearly as time consuming to assemble.