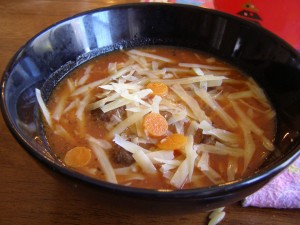 We had this soup for dinner the other night.  It was 104 degrees outside.  But I really missed eating soup! So we did.  In fact, we cooked the meatballs in the grill. I didn’t like the meatball recipe I used.  I usually use this recipe and I love it! So use that one for this soup. 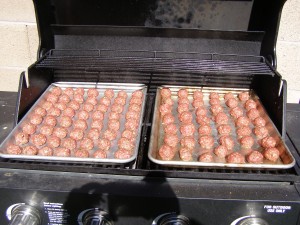 I also used tomato sauce instead of diced tomatoes because what I thought was diced tomatoes was in fact strained tomatoes. Oops.  I avoid tomatoes in cans because the cans have BPA in them. Tomatoes are also acidic so they really leach the BPA off the can lining. Instead, I buy Bionaturae in jars or Pomi in boxes (and I can get the Pomi at Walmart!).  I have to admit that aside from avoiding BPA both of these brands taste a lot better than canned tomatoes. The “strained” tomatoes worked just fine, though.

This soup is hearty and filling and delicious.  It’s even better the next day for lunch.