This jalapeno beer queso recipe is done in less than 30 minutes and is delicious. It is the perfect football game time snack! 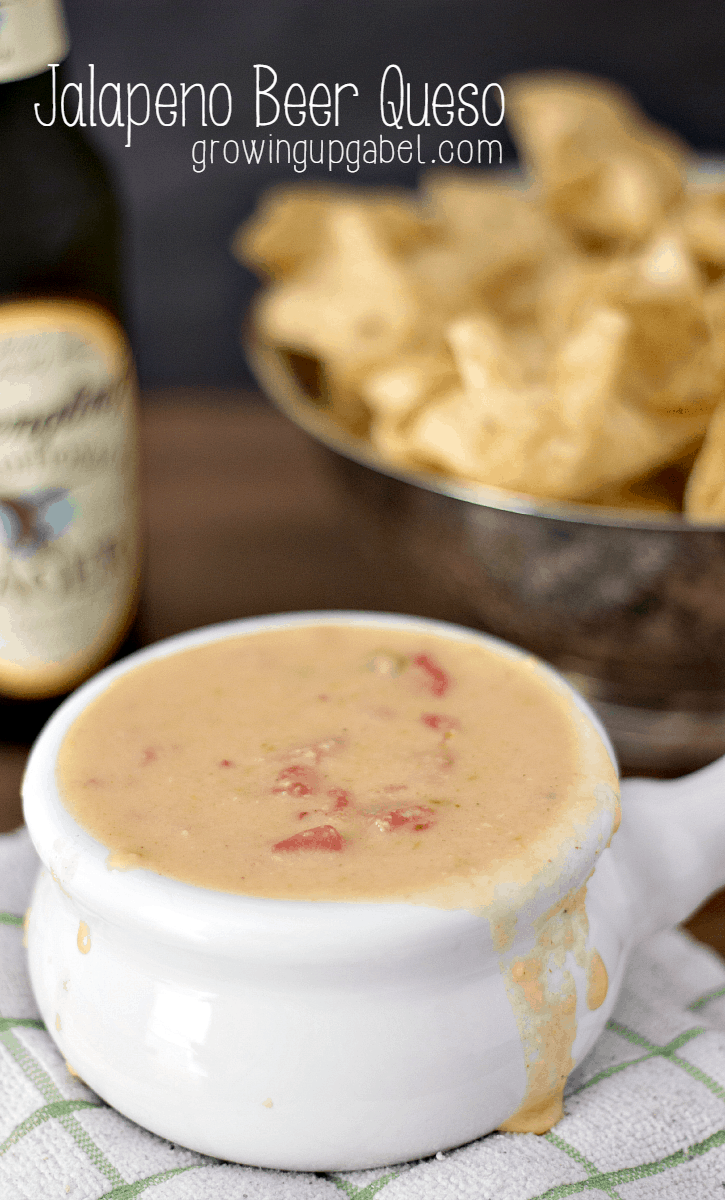 And what’s the best part about football? That’s right–snacks and beer.

The quintessential football snack is chips and dip. While normal, store-bought is usually just fine, I thought I’d try something new.

For my slow cooker chicken nacho taquitos, I experimented with a bunch of different cheese dips. One was Pace’s beer queso, which was delicious. It had the slightest hint of beer, which mixed with the cheese really well.

I thought I would attempt to replicate it. 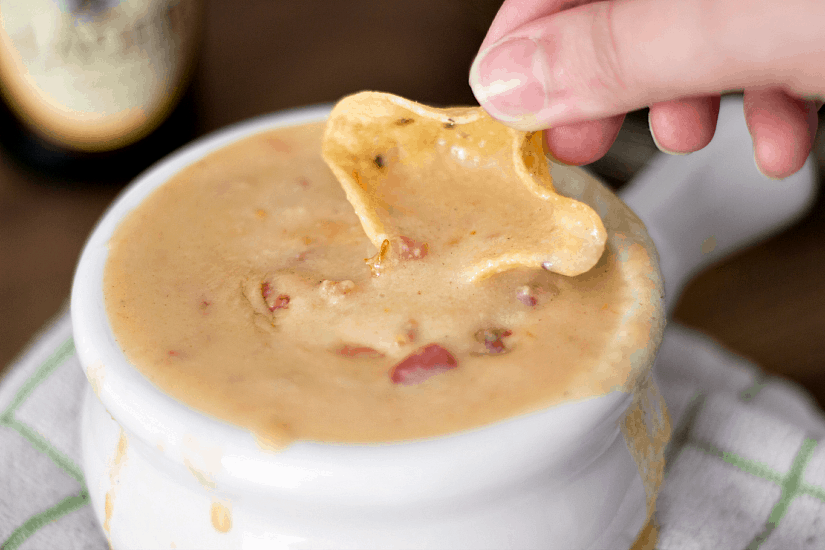 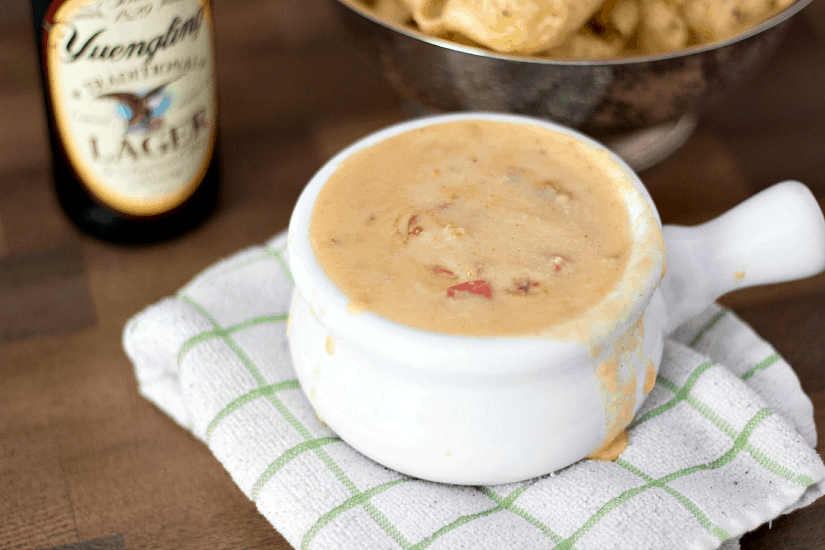 The two most important things about this recipe are to not add too much beer (trust me, did it) and to add the cheese as slowly as possible. If you add it too quickly, the queso will come out grainy. It will still taste fine, but cheese sauce is best when it’s smooth.

As for adding too much beer…I thought a whole bottle would be great. It wasn’t. The 6 oz indicated in the recipe is quite enough. You want a subtle beer flavor and adding a while beer just makes it overwhelming.

Not a beer fan? Use unsweetened evaporated milk instead. 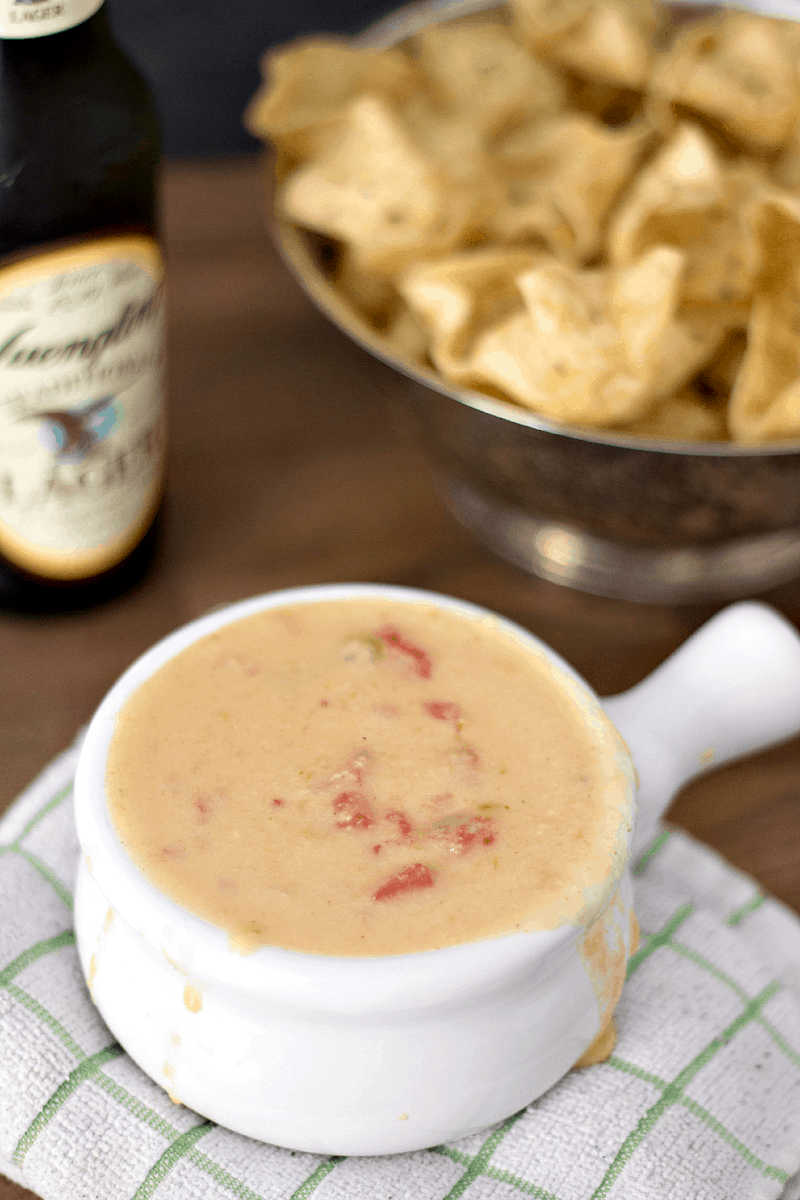 For the beer, I just used a Yuengling. No need to get fancy with it. It’s best if you use a lager that doesn’t taste too hoppy.

As for the cheese, you can honestly use whatever you want. I went with some white cheeses. I used jalapeno cheese and Monterrey jack. We wanted the queso to be fairly spicy, so I did 3 parts jalapeno, 1 part Monterrey. For a less spicy queso that still has a kick, reverse those. 🙂

The resulting dip was delicious and thick. Of course, anything with cheese and Rotel is generally pretty good in my book. 😛

To add a fun flare, serve your snacks on this no sew football field table runner!

To be honest, I don’t pay a lot of attention to football (I’m more of a hockey girl). But there is nothing like hearing a game come on the TV in the middle of October. It doesn’t feel like autumn without it.

Are you excited for football season? What’s your favorite game time snack?