A shrimp boil is one of my favorite ways to feed a crowd. A simple spice pack is added to water. Then boil potatoes, sausage, corn and shrimp.  Serve with melted butter for dipping and the shrimp boil will become your favorite party food. 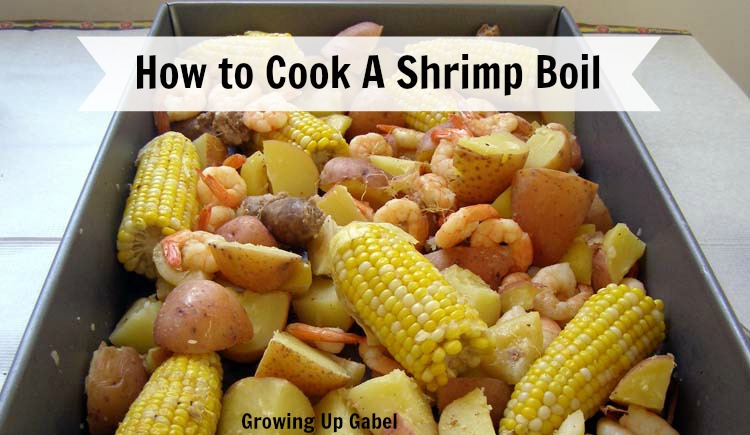 For my daughter’s birthday in July, I decided that I wanted to do a shrimp boil for the food.  A shrimp boil is a one pot stop for dinner, which I decided would be a nice change from the usual hot dogs and burgers summer fare.  When the guest count came in at 30 people, though, I balked a little at the amount of shrimp I would need to boil! But I had it in my head that I wanted a shrimp boil so that was that.

Shrimp boils consist of shrimp, corn, sausage and potatoes, all cooked in a big pot. I do this differently almost every time I make one.  The amounts called for are general — use as much or little as you want of each.  Just make sure to cook in the proper order.  The times are also a general guideline.  Each pot will cook differently so just watch and test so you don’t get mushy potatoes.  Sometimes I use red potatoes, other times I quarter Idaho potatoes or whatever I have on hand.  I usually use Italian sausage, but kielbasa or any other sausage works, too.

For our party we quadrupled this recipe — using two pots and cooking two separate batches. It was a TON of food! No utensils allowed!

Fill a large stock pot about 2/3 full of water. Place seasoning bags in water and bring to a boil.
Add in lemons, if desired.
Add potatoes and boil for 7 minutes.
Add uncooked sausage and boil for 6-8 minutes.
Add corn and boil for 2-3 minutes.
Add shrimp. Cover pot and turn off heat. Cook until shrimp are pink and cooked through.
Strain and serve with melted butter and Old Bay seasoning.